It’s time to find the first orienteering world champions of 2022 – when World Ski Orienteering Championships kick off on Tuesday, March 15 in Finland.

During four competition days in the Kemi-Keminmaa-area, the athletes will compete in sprint, pursuit, middle and sprint relay as the final event on Saturday 19th.

All competitions can be followed in high level web-tv production with English commentary. Get your ticket at the orienteering.sport LIVE page. 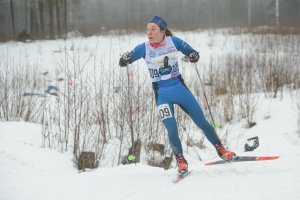 Hoping for medals
One of the competitors in Finland will be the reigning world champion of pursuit race, Sweden’s Lisa Larsen.

– I’m really looking forward to the championships and I hope to win medals – both in the individual events and in the relay. I have some medals from last year to defend and hope to do it as well this year.

In addition to the gold medal in pursuit, Lisa finished second to take a silver medal in last year’s WSOC sprint relay in Estonia together with teammate Erik Blomgren.

And the impressive results have continued into 2022 with three silver medals during the European Ski Orienteering Championships in Bulgaria (middle, sprint relay, relay).

– It’s been a great season until now. I’m generally happy about the European Championships in Bulgaria – except for the sprint [Lisa mispunched]. I will have to try and do it better this time.

Favorite event: Pursuit race
Since ESOC, Lisa spent most of February in Sweden doing lots of SkiO-competitions and feels her shape is at least as good as in January.

And therefore, she goes confident into the WSOC-week in Finland.

– I really like mass starts, so I’m looking forward the pursuit race and the middle distance as well. The sprint is probably where I have the lowest expectations, but of course I will fight to get the best possible starting point in the pursuit race the next day.

– I have seen the old maps and it looks quite hilly around the stadium and that normally suits me well. But besides that area, I think it will be rather flat and with small marshes and narrow tracks – more like Swedish terrain. So overall I believe the terrain will suit me well – but all the Nordic Skiorienteerers will probably feel like home, I think. So I expect some close races.

More than 100 athletes in total will be ready on the WSOC starting line – with Norway, Sweden and host nation Finland entering with maximum 16 skiorienteerers.

Looking out for fellow Swedes and Kudre Schnyder
When asked who will be her biggest competitors in the fight for medals, Lisa Larsen answers:

– Magdalena Olsson and actually all the Swedish girls, who did well at ESOC in Bulgaria. And of course, Daisy Kudre Schnyder, who won almost everything at last years WSOC – I think she will be going really fast in Finland. And I expect the Finnish skiers to do good.

The World Ski Orienteering Championships in Finland will begin with the sprint distance on Tuesday at 13.00 EET (UTC+2).

The SkiOrienteering World Cup of 2022 will be decided as well, and so will the Team World Cup and the new U23 World Cup. Find the standings here.