This year, on Friday 21st May, the International Orienteering Federation celebrated its 60th birthday. In this fifth and final article connected with the anniversary, we look back to the half-way point in IOF’s evolving history, to a year where the peak of interest centred on the World Orienteering Championships (WOC) staged around the lovely spa town of Mariánske Láznĕ in what was then Czechoslovakia. This year, WOC is again in what is now the Czech Republic.

In 1991 the second Junior World Championships was held in a newly-united Berlin, and the second-ever SkiO World Cup took place. This was a time of much political change in Europe, and IOF welcomed the Baltic States as new, full members.

WOC was the only IOF FootO event of the year, as at that time it was held every two years, alternating with the World Cup. There was a huge sense of anticipation in the air for the first Short Distance event in WOC history. When Sprint races were introduced later, this format was renamed as Middle Distance.

In the morning of Short Distance day, 10 semi-final races, 5 for women and 5 for men, took place simultaneously, with the first ten in each race going through to the Final. Times were close, with less than 4 minutes separating first and tenth places in some races. The organisers were strict with the rules – all punch marks had to be within the correct boxes on the control card. This led to 9 disqualifications, including Yvette Hague (GBR), who recorded the fastest time in the women’s semi-finals, and top Norwegian runner Ragnhild Bente Andersen.

Sixteen nations were represented in both women’s and men’s finals, held at Karlovy Vary. The courses had some steep climbs early on and some tricky route choices, before crossing a specially-made bridge over a river followed by an agonisingly long run across the local racecourse, finishing in front of the stands and an estimated crowd of 7,000. And that huge home crowd had much to celebrate: 2 gold medals, for Jana Cieslarova and Petr Kozak, and silver for Ada Kucharova. Bronze medallist in the women’s race was Marita Skogum, Sweden. Kozak had started second and ran the 5.8 km in 29:20, then had a long wait before he was confirmed the winner by 37 seconds. Silver and bronze medals went to Swedes Kent Olsson and Martin Johansson. 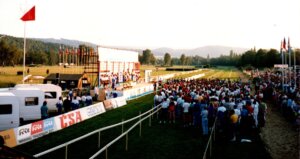 Short Distance prizegiving on the racecourse

Long Distance was still called ‘Classic’ in 1991. And classic ‘continental’ terrain was provided, with some steep slopes and many crags and boulders. In the women’s race over 10.5 km, history repeated itself, with a win for Hungary’s Katalin Olah: 19 years earlier Olah’s compatriot Sarolta Monspart became World Champion, also in Czechoslovakia, and until 1991 hers was the only WOC gold medal ever taken by a non-Nordic athlete. The home country won a bronze medal here: Jana Galikova was 14 seconds down on silver medallist Christina Blomqvist, Sweden. The legendary Swede Jörgen Mårtensson won the 17.4 km men’s race by over 4 minutes from team-mate Kent Olsson, with Sixten Sild, Soviet Union in third place. 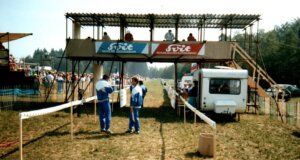 In the Relay the big questions were, could Norway’s men make it six in a row and could Sweden’s women add to their record of 4 golds and 2 silvers in the previous 6 WOCs. In 1991 relay teams consisted of 4 athletes, and with individual legs taking more than 50 minutes (women) or an hour (men), the Relay was a very long-drawn-out affair. Sweden’s women achieved their goal with a win by almost 2 minutes over Norway, the home nation coming third, but it was Switzerland that triumphed in the men’s Relay. Christian Aebersold took over from Urs Flühmann’s fine third leg run to pick up 4 places on the final leg and seal a win by 22 seconds. Norway had to settle for silver medals this time, and Finland took the bronze. The winning team’s total time was 4:42:37!

TrailO was not an IOF discipline back in 1991, but a ‘Handicapped Race’ for wheelchair users, a popular form of Orienteering in Czechoslovakia at that time, was an unofficial inclusion in the WOC programme. There were 2 courses, for men and women, in a flat area with roads, paths and parkland with short grass. The self-propelled had a clear speed advantage over those being pushed by a helper! The finish was in a small stadium in the town where a good crowd had gathered to cheer in the competitors.

This was an excellent WOC quality-wise, but financially it was disastrous for the organisers, who lost a huge government grant through political policy changes in Czechoslovakia in the run-up to the event.

The second-ever Junior WOC was held in Berlin. Gold medal winners included athletes from Poland, the Soviet Union and Germany. The team competition was won by Finland with Sweden a close second. The Classic race crossed the old East German frontier for the final controls, with the finish precisely on the former so-called ‘death strip’ between East and West. The race schedule was criticised for being far too demanding: three competitions (Short, Classic and Relay) in four days, compared with WOC which had 5 days for the same programme.

There were only two disciplines in IOF in 1991, FootO and SkiO; neither TrailO nor MTBO were at that time official disciplines, although they were in the process of becoming established. 1991 saw the second-ever SkiO World Cup which consisted of 6 races: one round in Switzerland, France and Italy, and the final three races in Finland – a 1-hour film of the Sprint was transmitted on Finnish TV a week later. 94 competitors from 13 nations took part, with the Scandinavian countries as usual dominating, but there were also good performances from Bulgaria’s women and Italy’s and the Soviet Union’s men.

Arja Hannus, Sweden won three of the six races and led in the final standings by 7 points, ahead of her compatriot Annika Zell and the Finn Virpi Juutilainen. Anssi Juutilainen headed the men’s list at the end, winning by 6 points over Bo Engdahl, Sweden, with Vidar Benjaminsen, Norway in third place.

The old IOF logo design – the colour was dark blue

In September 1991 the Baltic States became independent as the Soviet Union headed towards dissolution, and it wasn’t long before Estonia, Latvia and Lithuania were in the fold as full IOF members. At that time South Africa was close to becoming a full member, and there was significant revival of interest in China, with help from Hong Kong. IOF membership was reduced by one, however, through East and West Germany coming together!

Heinz Tschudin, Switzerland was IOF President at that time, and the IOF Secretariat (office) was situated in Sollentuna, just north of Stockholm, with Secretary General Lennart Levin and office staff Karin Tibbelin and Berit Pehrsson. German was still an official IOF language, so the IOF magazine Orienteering World, published 4 times a year and edited by the German orienteer Peter Gehrmann, had all its content printed in both languages.

Two topics dominated policy discussion in 1991. There was political upheaval under way in Europe at the time, and the new Europe was considered by some to be too big, for proper promotion of democracy and participation, to be just one IOF Region. The issue was discussed at length by Council and at the Presidents Conference. The second big topic was participation in the World Cup; this was considered the previous year to be too expensive for many nations, and cost-cutting ideas were being planned for 1992 and thereafter whilst retaining the principle that events should be well spread.

Orienteering in the World Games?

At WOC the fourth IOF Mapping Conference was held, a convention that has been repeated at WOCs ever since. There was also a Scientific Symposium at WOC 1991 on the theme ‘Performance Improvement in Orienteering’. IOF had a Scientific Committee headed by Roland Seiler, and a magazine entitled Scientific Journal of Orienteering was published annually.

Gold medals to Hara and Bogar at the WMTBOC Sprint