eTrailO has really taken off in many parts of the world, and over the past three months it has been possible to take part in competitions in two or three different nations in the same week. Last month, for example, you could compete in countries as far apart as Colombia, Hong Kong, Russia and Spain. Locals have really taken to it too; for example in Colombia one event had 436 competitors of which 106 were Colombians. The record in participation so far, on a single-day, appears to be 1,486 at TempO Cadiz Day 1 in mid-April. There is, of course, no limit to the numbers that can take part.

The speed-format eTempO has enjoyed the greatest following so far, but the classic PreO format in virtual form has attracted many participants too. In this format there is no decision-timing, although there are overall time limits, but the control siting can be more subtle than would be fair in TempO.

In ‘real’ PreO there is a decision-point for each task, a specific place on a path or track from which the up-to-five kites can be seen in a specific order, but competitors can go back and forth on permitted paths and tracks to look at the problem from different angles. In virtual PreO you can do exactly the same, using Google Street View! So when you move to a new task you can go to different viewing points as well as look at the initial photo, the one you must use when recording your decision. As in eTempO, the task screen has a photo with computer-generated O-kites (much clearer than the real thing!), and buttons A up to E (varies depending on the number of kites) and Z – used when there is no kite at the centre of the circle. You get the competition map at the start, showing all the controls just as for a FootO course.

In ePreO as with ‘real’ PreO, terrain with multiple subtle contour features, complex areas of crags or detailed vegetation can be used, as well as less detailed areas seen from a distance. Often you go back and forth several times, viewing the terrain from every allowed angle, before making a decision. The map, including vegetation detail, has to be very accurate. The competition can take up to two hours of intense concentration – you feel quite tired by the end! And one thing is certain: you will learn a lot about map – terrain interpretation, in checking the location of all the kites you see in the photos.

Here is the map from a recent Hong Kong event, held in the grounds of a prison museum. The second column of the control descriptions gives the number of kites (e.g. A-C means 3 kites) and the last column is the direction of viewing in the photo. As you can see, the map at 1:4000 is quite complex. 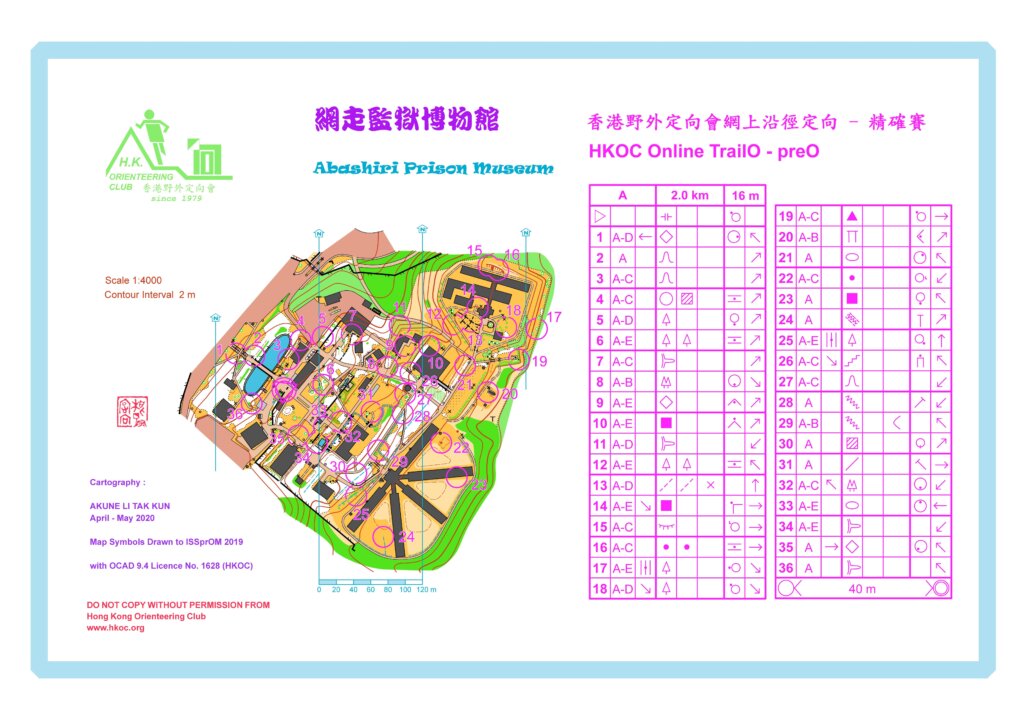 Below are two controls – numbers 14 and 18, in the north-eastern part of the area. The photo is shown along with an enlargement of the map at that site, marked with locations of the kites, to give an idea of how complex the tasks can be. 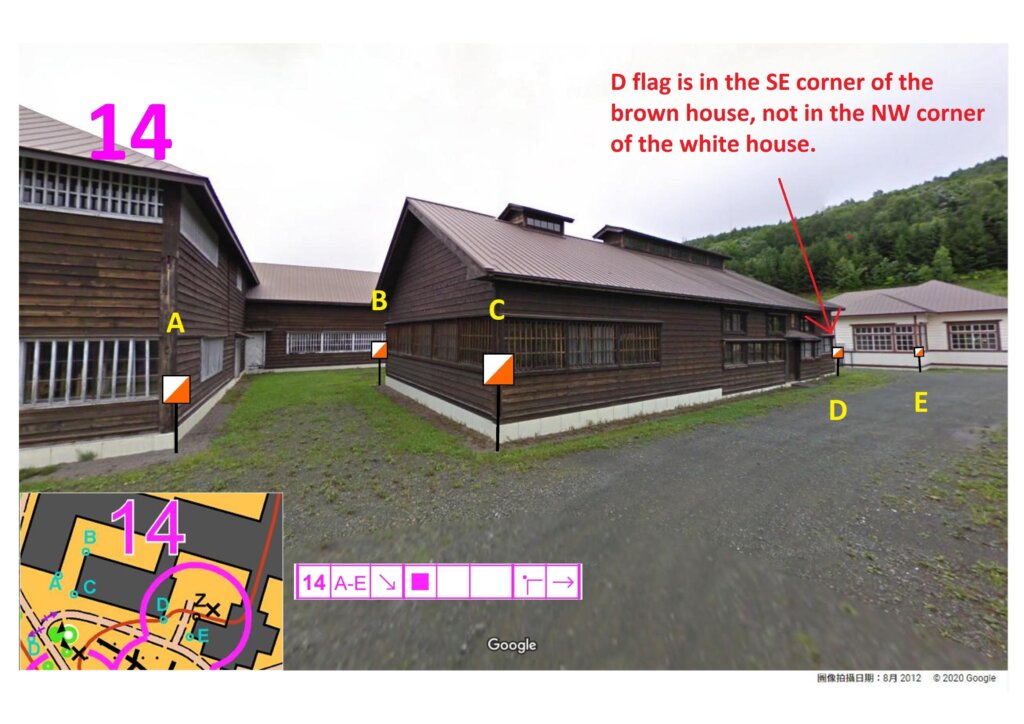 Control 14 – answer is Z – no kite matching the centre of the circle on the map. 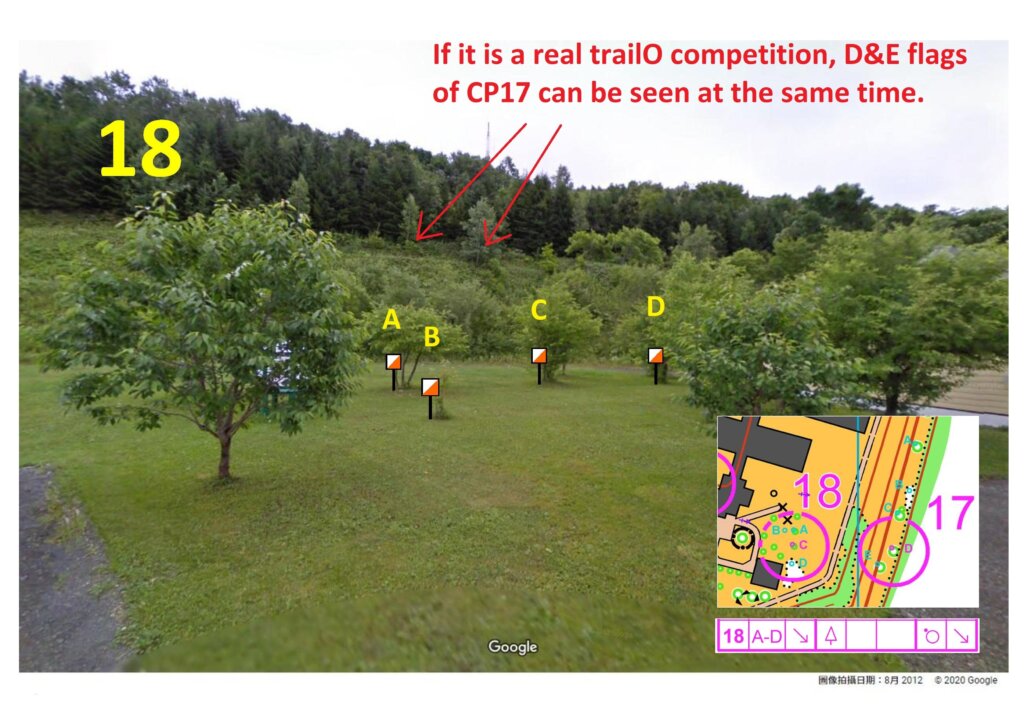 Control 18 – answer is kite C. Try to identify all the trees on the map (you are looking south-eastwards). As the planner notes in the comment on the slide, it is easier to set eTrailO than the real thing! Controls 17 and 18 would have interfered with each other in real PreO, so the course would have to be different.

At the end of the event, results are issued online and a full Solution Map is published – showing for all controls where the kites were in relation to the circle. In the Hong Kong event there were 295 competitors from all over the world, and 13 of these got 35 out of the 36 tasks correct – no-one achieved a full score.

Software such as Zoom is being used by participants to discuss the event afterwards. Zoom-sessions in the UK have brought in the event planners as well as attracting eOrienteers from as far away as Brazil. So far, up to 15 people have been in chat in these sessions.

Thanks to Hong Kong Orienteering Club for the samples.

Successful WSOC 2021 in many ways