Pavel Dudik, Czech Republic and Pinja Mäkinen, Finland are the leaders of the Para and Open classes respectively after Day1 of the PreO competition. Mäkinen was the only competitor to achieve a full score of 28 points.

Competition was tight on a very warm day with a long and tricky course in Portugal, and following Mäkinen there were 11 Open class competitors who dropped just one point. The two timed controls, one at the start and one at the end, proved difficult and there was a big spread of times amongst competitors with the same points score. 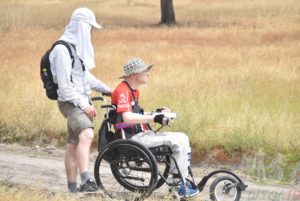 Protection from sun and insects was a good idea today: Søren Saxtorph, Denmark in deep concentration on his way to 6th place in the Para class     Photo: WTOC 2019

In the Para class Ola Jannson, Sweden dropped one point, as did Dudik, but Dudik was quicker at the timed controls by 19 seconds.

Tomorrow there is a model event, and competition resumes on Thursday with PreO Day 2. The many competitors who are just one or two points from the top will feel they still have a chance of a medal! Concentration will however be severely tested by the even higher temperatures promised for Portugal for later in the week.