Jan Furucz, Slovakia, won gold in the Open PreO competition for the second time, and for Michael Johansson, Sweden his P (Physically Challenged) class win was his third success.

Two days of mentally strenuous competition provided a total of 73 controls and 4 timed controls (TCs) to be solved. Furucz was wrong on only two of the controls, so 71 correct, and his total time used in the TCs was 66 seconds. This was just 8 seconds quicker than silver medallist Antti Rusanen, Finland who also scored 71. The Open class bronze medalist was the only other athlete to score 71, Bjarne Friedrichs from Germany, whose total time at TCs was 91 seconds. 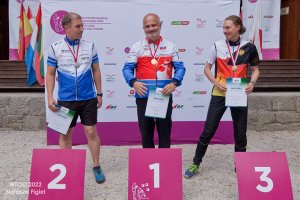 Jan Furucz was world champion also in 2018, and has also won 1 silver and 2 bronze medals in World Championship TempO competitions between 2015 and 2018.

Michael Johansson won the P class in 2014 and 2016, but his compatriot Ola Jansson has won the last three times. Today he completed with 64 correct answers in all and a total TC time of 134 seconds. Vladyslav Vovk, Ukraine won the silver medal with 63 points plus 305 seconds, and bronze went to Jana Kostová, Czech Republic, 61 points plus 130 seconds. 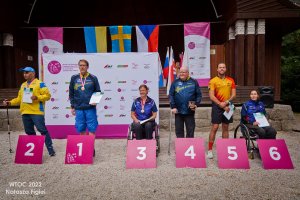 Looking for a present? Order “Memories of the Winners” now.