An exciting Sprint Relay in which the lead changed several times was won by Norway in a sprint finish, with Sweden finishing just 5 seconds behind. This was good enough to give Sweden overall victory in the Team World Cup. Switzerland were third today and finished second overall, ahead of Norway.

Sweden dominated the race early on, their teams taking the first three places after leg 1. Tove Alexandersson for Sweden 1 was the fastest, 9 seconds quicker than Hanna Lundberg. Switzerland were 7th and Norway 13th at this stage, but the times were very close. 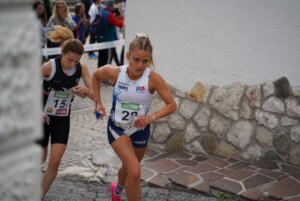 Determination as the race gets going   Photos: William Hollowell

Joey Hadorn then took over, setting the fastest time on leg 2 and bringing Switzerland to the second change-over in the lead. Isac von Krusenstierna ran well for Sweden, second fastest and not far down at the next change, whilst Audun Heimdal had a 4th-fastest run to bring Norway up to 6th.

Then it was Kasper Harlem Fosser’s turn to show that he is just as good in urban races as in the forest, setting the fastest time on leg 3 and getting up to first place for Norway at the end of the leg. Emil Svensk held second place for Sweden, 7 seconds down, and Great Britain came up to third with Switzerland close behind, thanks to a fine run by Ralph Street. 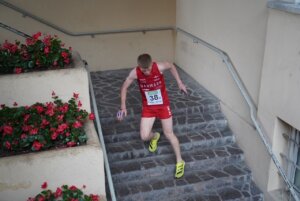 Agility was needed as well as speed and secure navigation

So it was Andrine Benjaminsen for Norway trying to hold off Sara Hagstrom for Sweden, Megan Carter Davies for Great Britain and Simona Aebersold for Switzerland. A great race on the streets, steps and hills of Cortina ended with Benjaminsen holding off Hagstrom in the sprint to the finish. Aebersold and Carter Davies lost 45 seconds on the course and finished third and fourth, with Sweden’s second team sandwiched between them. 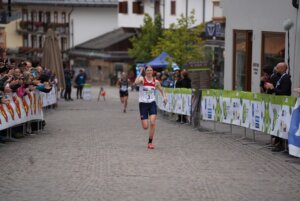 The result means that the Team World Cup top six remains the same as before today’s race, with Finland, Czech Republic and Russia taking positions 4 to 6. Switzerland, Sweden and Norway each won one of the season’s Sprint Relays (two in the Team World Cup, plus the World Championships race).