In 2014 Daniel Hubmann won 5 races out of the 14 held, and was so consistently good throughout the season that his final winning margin was more than 500 points!

Biggest star ever in the men’s World Cup is Daniel Hubmann, Switzerland, who holds the record for the number of overall World Cup victories, six in all, won between 2008 and 2015. His compatriot Matthias Kyburz has won five times. The only other athlete with more than one title to his name is Thierry Gueorgiou, France who won in 2006 and 2007.

In the eleven editions up to and including 2005, a new name appeared at the top with each edition. Five of these were from Norway and three from Sweden, joined by a Dane, a Finn and a Russian. The first athlete to break the Norway-Sweden dominance of the early years was the Dane Chris Terkelsen in 1998. Switzerland’s impressive run of wins starting in 2008 has been broken only in 2019 where Gustav Bergman, Sweden reached top spot.

Daniel Hubmann with his home crowd at the end of the final race in 2010. He won this race by 9 seconds and the overall World Cup by almost 200 points.

The consistent and ever-green Daniel Hubmann
Daniel Hubmann first came into the top three in the overall standings in 2005, when he was third behind Russian Andrey Khramov and Thierry Gueorgiou. In 2019, 14 editions later and at the age of 36, he was again third! Overall he has won World Cup races 31 times, his best year being 2014 with 5 wins. He has been second 27 times and third 13 times – and is still going strong! He has been most successful in sprint and Middle Distance races, but has also shown his prowess at Long Distance, winning World Championships gold in 2008 and 2009.

As with Simone Niggli, Daniel Hubmann is a very well-known athlete in Switzerland, and along with younger brother Martin who is also a regular member of Switzerland’s team, enjoys the support of a large official fan club with its own well-visited website.

Kyburz – not always in Hubmann’s shadow!
Matthias Kyburz’s victories have come in 2012, 2013 and 2016-18. An extreme sprint talent in his early senior years, he gradually improved also in forest orienteering up to a level where he won the overall World Cup for the first time in 2012 including World Cup races in all formats. 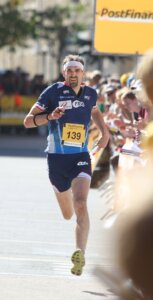 Thierry Gueorgiou, France, one of the very top stars in the 7-year period 2005-2011: he enjoyed two overall victories, was four times second and once third.

The legendary Thierry Gueorgiou
2007 was a special year for the men’s World Cup. Frenchman Thierry Gueorgiou ran 8 of the 10 races, and won all 8! Most well-known as a master of Middle Distance, Gueorgiou’s wins in 2007 included the World Championships Sprint in Ukraine.

The previous year he won by a narrow margin over Daniel Hubmann, but in 2007 he was unbeatable. The following two years he came second overall, behind Hubmann, and he also placed second in 2011, where he ran in just 6 of the 10 races and won three of them. In 2010 he was third.

The legend who never won
Sweden’s Jörgen Mårtensson achieved remarkable success in World Championships, winning 11 medals in all, but never won the World Cup overall and enjoyed only one race victory. He finished second overall in 1988 and 1996, and third in 1990.

Olav Lundanes, Norway is following a similar line; two second and three third placings is his World Cup record so far, yet he has won 10 gold medals in World Championships in the last ten years!

New paths of cooperation for the IOF and ISF