The heat in Hungary – over 30 degrees – combined with hilly and often diffuse terrain made for a very hard Long Distance final, the last race in WMOC. The most convincing result was that of the Norwegian Øystein Kvaal Østerbø, who won M40 by more than 10 minutes.

Additional to those in classes W90, W95 and M95 where there was only one competitor, Østerbø was one of four competitors finishing the event with three gold medals. The other three are Jane Smutna, Czech Republic in W55, Jurate Uleviciene, Lithuania in W70 and Brigitte Schmiedeberg, Germany in W85. Nine participants won two gold medals. 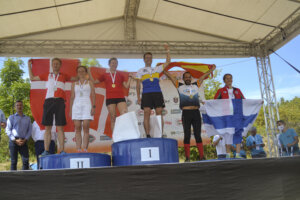 In this race there was a joint gold-medal award; in M60 Per Backlund, Sweden and Jozef Pollák, Slovakia finished with the same elapsed time, and third-placed Zdenek Zuzanek, Czech Republic was only 37 seconds slower. M70 Keld Johnsen, Denmark had the narrowest win, by just 9 seconds, and home athlete Martin Hajdu won M50 by 14 seconds. Because of the terrain and weather conditions, times in general were very spread out.

As in the Middle final, M75 was dominated by Finnish athletes, who here took the first six places plus eighth. Overall, gold medals went to athletes from 14 nations – 10 different nations in both the men’s and the women’s 13 classes.