Venla Harju: “My aim all the time has been to come back!”

The four times WOC medallist returns to competition after a year recovering from her pregnancy, with the aim of winning another medal. 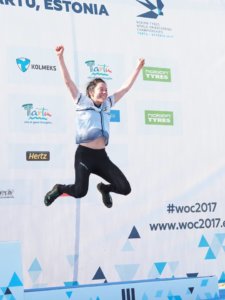 After she won two bronze medals in the 2017 Nokian Tyres World Orienteering Championships in Estonia, Venla Harju took a break from elite orienteering when she became pregnant. This Finnish orienteer won her first two WOC medals in her home country in 2013: a second place in the Relay and a bronze medal in Sprint. Four years later, Estonia brought her another two bronze medals in Middle distance and Relay. Venla has already returned to elite orienteering, and Finland was the stage for her first World Cup race last June where she was 6th and 7th in Middle distance and Chase Start.

Disconnecting from orienteering is nearly impossible: “my aim was all the time to come back,” she tells us. Even during pregnancy she recognises that being in touch with the sport was an essential need: “I followed the TV-coverage or the GPS from all important competitions during 2018, and was just waiting for when I could compete again myself.”

Not only was she following orienteering competitions, but she also competed until the last moment of the pregnancy: “Actually I was walking in the forest, as a spectator for a relay training, the day before I went into labour!”

Apart from being an elite orienteer, Harju works as a researcher. Her first research paper has just being published, and flexibility is the key to her success: “I can mostly plan my schedules so that it is possible to train. It has also been possible to work only part-time, which is a must at least for me, to have enough recovery time.”

Naturally, her husband Antti Harju shares with her their new joint responsibility. Moreover, Venla thinks about him when we ask her about who has inspired her to be an elite orienteer. “He has supported me throughout my whole adult career, and especially during the hard times I have had.”

Although a baby is an important change in the lives of all parents, Harju has had to face a different orienteering year, with it including the first WOC focused only on forest races. In her view, this new WOC format can benefit her: “I think it’s easier to prepare for forest or sprint only, and I guess this forest year suits me better now after the pregnancy.”

She faces this WOC with enthusiasm and is running all the races, but Harju is especially focused on Long distance. “This is the first time I feel I can run well and succeed on Long distance; Middle is always a great technical and mental challenge, and in Relay it feels like running for the whole of Finland!” But she is really focused on her aim: “winning a medal!”