Today’s Long Distance competition at the Orienteering World Cup Final in Cansiglio, Italy will be remembered for 2 dominating performances by Tove Alexandersson of Sweden and Kasper Harlem Fosser of Norway in winning the women’s and men’s races respectively.

This was a challenging long distance and it was clear from the start that physical capacity was going to be a determining factor. There was some tricky navigation in places and a few longer route choice legs but a review of these showed that these were not decisive in determining the winners.  The split times along the course show a similar pattern in both races with a consistent increase in time differential to the rest of the field throughout. Their superior physical strength on the day, combined with no significant navigation or route choice errors, left these two athletes unbeatable. Tove and Kasper were the only athletes even close to the projected winning times.

The women’s competition was contested over a course of 13.2 km with 570 meters of climb and Tove finished in a time of 1:20:59 which was just over the expected winning time of 1:20:00. But the second place finisher, Simona Aebersold (SUI), was a distant 5:42 behind. Natalia Gemperle (RUS) finished third 6:11 behind after losing time and being passed by Simona towards the very end of the course. 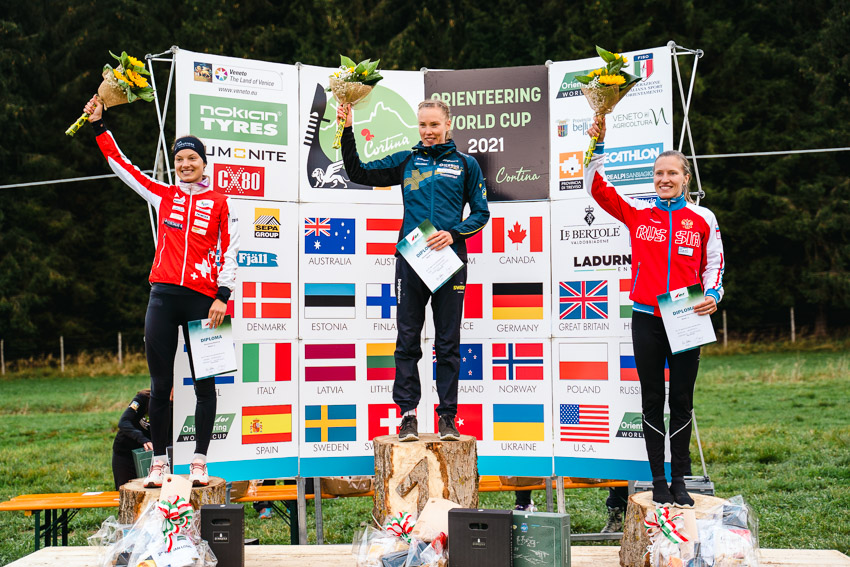 It was good to see that Tove Alexandersson had recovered from the Covid-19 infection that disturbed her at the previous World Cup round in Idre Fjäll, Sweden in August, and was back in the shape she showed at the Nokian Tyres World Orienteering Championships in the Czech Republic in July when she won a record 5 gold medals.

Kasper Harlem Fosser was equally dominant among the men finishing the 19.1 km course with 850 m climb in 1:39:51, just below the expected winning time of 1:40:00. But the the closest competitor, Matthias Kyburz (SUI), was well behind, at +5:32. His Swiss teammate Daniel Hubmann finished in 3rd, 6:05 behind Fosser.

With today’s win Kasper Harlem Fosser completed a sweep of the 3 Long Distance competitions on the international program in 2021 and gave notice that he is the orienteer to beat when long distance is on the program.

With one individual competition remaining in the 2021 World Cup, today’s results put Tove Alexandersson and Kasper Harlem Fosser in the lead among the women and men respectively.

The Middle Distance competition on Saturday will bring some suspense in the women’s class. Tove’s lead over Simona Aebersold is a mere 5 points. Should Tove finish ahead of Simona on Saturday she would win her 7th consecutive World Cup overall title. Simona has several chances of winning her first overall World Cup should she finish ahead of Tove, with a base scenario being that any finish in the top 5 would give her the title, as long as Tove finishes lower in the results list. Although no other women can win the overall title, there is still a lot to be determined for places 3-6 and the overall World Cup prize podium. Hanna Lundberg (SWE) and Andrine Benjaminsen (NOR) strengthened their 3rd and 4th placings through 8th and 4th place respectively today, and Natalia Gemperle and Sara Hagström (SWE) moved up into 5th and 6th respectively through their 3rd and 5th place finishes today.

Among the men Kasper Harlem Fosser has via his win today considerably strengthened his grasp on his first overall World Cup title. His lead over Matthias Kyburz is at 77 points and over Daniel Hubmann 91 points. Should Matthias win on Saturday, Kasper would need to place 17th or better and should Daniel win on Saturday, Kasper would need to place 31st or better to win the overall World Cup.  The battle for the top 6 places among the men also tightened somewhat today, with Joey Hadorn (SUI) losing 2 places after a very big navigation mistake to today’s first control and only a 72nd place on the day. The move of the day was Audun Heimdal moving up from 8th to 6th place after a very strong 4th place finish in today’s race. We can look forward to exciting races on Saturday.

Full results, split times, maps and GPS tracking can be found on the Live page