Switzerland and Norway World Champions in the Relay

Switzerland won the women’s Relay and Norway the men’s Relay at the Nokian Tyres World Orienteering Championships in Sigulda, Latvia.

The women’s Relay was a battle between Switzerland and Sweden. Swiss Elena Roos was nine seconds ahead of Sweden and Helena Bergman after the first leg. Sweden’s Karolin Ohlsson was eight seconds ahead of Julia Jakob in the Swiss team after the second leg.

On the last leg Judith Wyder, Switzerland and Tove Alexandersson, Sweden were close thoughout the whole leg. They ran together on the long leg to the 13th control and punched at almost the same time with 700 meters left to the finish.

Tove Alexandersson made some small mistakes and Judith Wyder was stronger in the fast and open last part. Switzerland managed to win with a 15 seconds margin to Sweden. Russia took the bronze, 2.17 minutes after the winner.

The reigning champions Norway took their third WOC Relay gold in a row, despite the fact that the Long Distance king Olav Lundanes got ill the day before and didn´t run. The young stand-in Gaute Hallan Steiwer ran an impressive first leg and was second to the first change-over, only 18 seconds behind leading Latvia. The home nation Latvia was in the medal fight until the very end. Nine teams were all in the medal fight until the tough long leg to the 14th control. 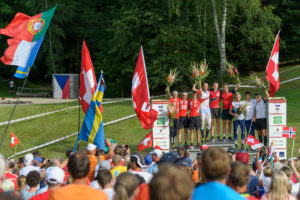 Norwegian Magne Daehli took a good route-choice and came first to the 14th control. Switzerland and France were the strongest among the other teams and came second and third to the control. With only a few controls in open area left, all three managed to defend their positions and Norway won the gold, Switzerland the silver and France the bronze. Impressive finish by Austria on fourth position, only seven seconds behind the bronze. Latvia finished in 8th place, only 58 seconds behind the winner.

Clarification regarding organising of World Ranking Events for the season 2021

A Glance Back to January 2020 Youth Training Academy in Algeria