This was held in late October 2019 in Maryborough, Victoria following on from the very successful 4 event Australian Championship Carnival. This was the first IOF MTBO Event Advisor clinic held in the Southern Hemisphere.    Maryborough is situated in a historical gold mining area 170 kilometres north-west from Melbourne.

This area is well remembered by many former elites, being the venue for the 2004 MTBO World Championship relay. Fond memories there for returnees Carolyn Jackson and Alex Randall who won bronze medals that day. Also, for coach Kay Haarsma; Eoin Rothery, who raced under the Irish flag; and Blake Gordon and many of the other Victorian organizers. The individual event for the 1985 World Orienteering Championships event was held nearby at the famous Kooyoora state park, just 50 kilometres north. 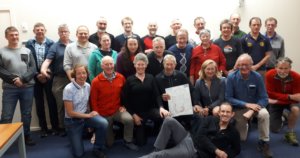 Sandor Talas, from Hungary, a renowned expert in rules and event organising, skilfully led the 26 attendees through the intricacies of advising/controlling major events. This group comprised 21 Australians, three New Zealanders and two from Great Britain. Besides information giving and discussions held indoors, there was also a terrain walk of the new sprint map examining mapping interpretations and the fairness of close controls.

A separate 90 minute talk specifically to outline the requirements if Australia/New Zealand was to apply to host a World Championship was given by Sandor in the evening preceding the carnival.