Both have four wins from six races, and are clear best in the SkiO rankings right now with one round to go.

Tove Alexandersson, Sweden won two individual gold medals in the recent European Championships (ESOC), in Sprint and Middle, plus two races in the first World Cup round. Her one close challenger this season is Russia’s Mariya Kechkina, who with one win and four second-placings is 21 points down in the standings. Sweden’s Magdalena Olsson has come second twice and is third-placed overall, the leader of a group of athletes all of whom have had some success this season.

Andrey Lamov won just the Middle race at ESOC but was dominant in the first round in Finland. Second in the standings is Erik Rost, Sweden with one win and one second place so far. The top four places are held by athletes from four different nations, with Bulgarian star Stanimir Belomazhev and up-and-coming Swiss athlete Gion Schnyder third and fourth respectively. Russia demonstrate strength in depth with three athletes in the top six in both women’s and men’s lists.

The final round is in Craftsbury, USA in early March. 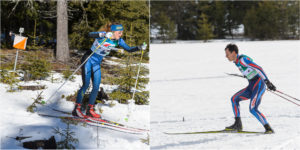 No World Masters Orienteering Championships in Slovakia in 2020