Tatyana Oborina and Vladislav Kiselev, both Russians, are this year’s SkiO World Cup champions at the end of the Individual World Cup season, and Russia has won the Team World Cup with Sweden second. 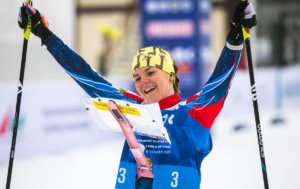 There were six individual races, the best five counting, and Oborina has the best score overall – 250 out of a possible 300 – with Kiselev scoring 245. The six women’s victories are shared between five athletes; only Alena Trapeznikova recorded 2 wins, but her record overall was inconsistent and included an unlucky disqualification and she finished in fifth place. Oborina has 1 win, 2 second and 2 third places. Second place in the women’s list is taken by Magdalena Olsson, Sweden (1 win and 1 second place), and third is the exciting 20-year-old prospect from Russia, Marina Vyatkina, who enjoyed 1 win, 1 second and 1 third place in the recent championships. Mention should also be made of the Estonian Daisy Kudre, who had an excellent championships and her best season overall so far, finishing fourth in the World Cup standings.

Kiselev, with 1 win, 2 second places and 1 third, has been the most consistent of the men athletes this season. Andrey Lamov and Sergey Gorlanov both have 2 wins to their names, and the sixth victory of the season was achieved by the incredible 46-year-old Russian Eduard Khrennikov – who now has a daughter competing at elite level too. The Russian men were dominant in almost all competitions this year, and take four of the top six places in the standings. Kiselev and Gorlanov are both only 23 and seem destined to have a very bright future in SkiO. Finn Tuomas Kotro has had a good season to finish fourth, and Markus Lundholm, Sweden has competed consistently to take equal fifth place with Khrennikov. Long-standing top performers Lars Moholdt, Norway and Erik Rost, Sweden, both now 34 years old, had disappointing seasons and finished seventh and ninth in the standings respectively.

Russians dominated the Relay races too; only in the ESOC women’s Relay was the Russian team defeated, narrowly by Sweden in an exciting race. Sweden take second place in the overall Team standings, and Finland third.