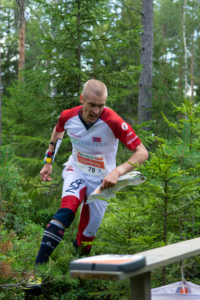 Olav Lundanes, Norway is proving to be one of the greatest Long distance competitors of all time, taking his sixth gold in this format and the fourth in succession, a convincing win by 1.39. His compatriot Kasper Fosser, still a junior, took the silver medal and Daniel Hubmann, Switzerland the bronze.

The first gold for Lundanes in this format came when he was 22, at Trondheim in 2010, and he followed this up with gold in 2012 in Switzerland. And now the sequence starting in 2016: Sweden, Estonia, Latvia and Norway. We can be sure he isn’t finished yet!

In the race today, over 16.6 km with 530 m climb, it was Kasper Fosser, 11 years younger and recent gold medallist in Middle, Long and Relay at the Junior World Championships, who was the clear fastest overall through much of the early and middle part of the race. In particular, his decision to take a route well north of the line at the start of the second long leg proved to be a very good one. But Lundanes was pacing his run well, and from leg 15-16 where he made a particularly good route choice, he got ahead and it stayed that way as Fosser lost a little speed and energy. Both Norwegians had near-perfect runs.

Daniel Hubmann, won the bronze, as his compatriot Matthias Kyburz ended 3 seconds slower after a frantic sprint down the run-in. Norway finished with three in the top six with Magne Dæhli in 6th place.

Clarification regarding organising of World Ranking Events for the season 2021

A Glance Back to January 2020 Youth Training Academy in Algeria