The Ukrainian athlete prepares himself for the Norwegian terrain after winning his first medal in Latvia in 2018.

The experienced Ukrainian orienteer Ruslan Glebov achieved his best results ever at Nokian Tyres World Orienteering Championships, WOC, 2018 in Latvia. It was an impressive performance last year, making it to the silver medal in the Long Distance. However we still find motivation in his own words regarding his second place: “silver was a boost of depression because it wasn’t the gold”. Not only Ruslan’s Long distance race 2018 should be highlighted, the impressive victory in O-Ringen a week ago must be mentioned. 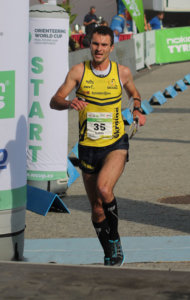 Although this year’s WOC in Norway will only include forest races, neither the preparation nor the way of planning training have changed a lot for the Ukrainian from other years. “Preparations for Norway are going well; just fewer sprints, that is the main difference,” he says. He is conscious about how demanding a Championship is: “After I won the medal I felt tired until the evening,” he tells us. So training has to be as demanding as the high level of the competition.

After such an impressive performance in Latvia, it is easy to think that Glebov would like to beat his own 2018 achievements. However he seems to be focused on the pure race, rather than results, especially taking into account the type of terrain in Norway. So, he insists on “coming back from the forest in good shape, as Norwegian terrain is so demanding.”

After Glebov’s amazing performances recently we will have to wait for WOC to see if he can win another medal for Ukraine this year!