Many superb athletes have graced the orienteering terrains and podiums across the world in the last decade. Their physical strength and agility and their technical prowess match the best in any Olympic sport. Now, the extent of TV coverage enjoyed by our top events, in particular the World Championships (WOC), is beginning to match the quality and attractiveness of our sport – helped by huge technical developments in the sport itself and the ways in which each athlete’s progress round a course can be followed. Our stars are beginning to get the benefits of the public recognition they deserve.

As in all sports, there are certain individuals who stand out from the crowd. In all four disciplines there have been athletes whose consistently high performance has earned them a stack of medals. 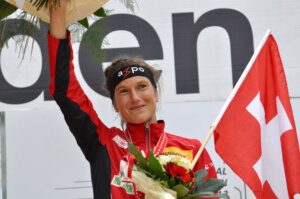 In the middle of the decade, one era came to an end and a new one started. The outstanding Swiss athlete Simone Niggli retired from top international competition at the end of 2013, having amassed 23 WOC gold medals. She won the World Cup overall 9 times, and was first in 68 World Cup races in all formats. Added to those are 10 European Championship (EOC) medals! She has been rated as the best woman orienteer ever, and her record is unlikely ever to be bettered – unless by … 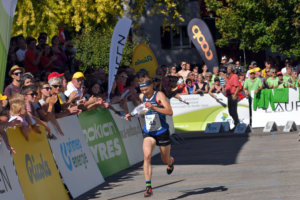 Tove Alexandersson, Sweden, now 28, has taken over the title of Queen of the Forest in a big way. She currently has 10 WOC and 6 EOC gold medals, and has 36 World Cup wins to her name, her first coming at the tender age of 19. She has proved her superiority in skill and fitness in SkiO too, winning 10 golds in SkiO WOCs. A fantastic all-round athlete who rarely suffers from injury, she has also recently achieved world championship gold medals in Skyrunning and Ski Mountaineering.

Both athletes are ‘cult figures’ in their home countries, France and Switzerland, Daniel Hubmann having his own vocal fan club that shows up at every major event. Gueorgiou (pictured right) became tagged as ‘King of Middle Distance’ because of his extraordinary success in this format, but he was in fact very proficient in all formats. He won 14 WOC golds between 2003 and 2017, plus 4 EOC golds. Hubmann, now 38, is still going strong, narrowly missing a medal in the recent European Championships. His tally is 8 WOC and 5 EOC gold medals.

Between them they have won World Cup races 62 times – Gueorgiou 30 and Hubmann 32.

Amongst the men, two others stand out: Swiss orienteer Matthias Kyburz has avoided being in the shadow of Daniel Hubmann through his own fine performances, initially mainly in Sprint but now as a full all-rounder. He has 5 overall World Cup wins to his name including 3 years in succession, 2016-2018, and a string of World and European medals. Olav Lundanes, Norway has established himself as a very determined and consistent Long Distance specialist. He has won 8 individual WOC gold medals, 6 of them in Long and 4 of these in successive years – 2016-2019.

Tove Alexandersson has been one of the women’s star performers in SkiO for most of the decade, especially in Sprint where she won gold in 5 World Championships (WSOC) in a row. The Russian women’s team has been strong throughout, with the biggest contribution to their Individual medal haul being Tatiana Vlasova. Russia won 4 out of the 5 WSOC women’s relays held between 2011 and 2019. 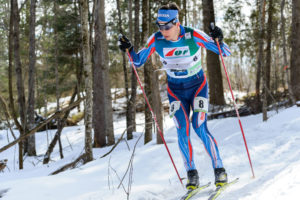 Russia is also strong in men’s SkiO. Andrey Lamov (pictured) has been the most consistent performer in their team, which has also won 4 out of 5 WSOC relays. The most well-known Russian SkiO athlete is, however, Eduard Khrennikov, now 48 years old and still competing at top level. He has been winning medals in WSOC and World Cup since 2000, and was bronze medallist in Sprint at WSOC 2019.

Several other ski orienteers have been at or near the top over the decade, including Magdalena Olsson SWE, Mervi Pesu and Salla Koskela FIN, Lars Moholdt NOR, Erik Rost SWE, Staffan Tunis FIN and Stanimir Belomazhev BUL.

In MTBO, the British rider Emily Benham Kvåle (pictured) has won WMTBOC medals in all formats and has been the most prominent woman rider of late. Marika Hara FIN has a fine record over an 8-year period including 5 WMTBOC golds, and Olga Vinogradova RUS has won the WMTBOC Middle race 3 years in a row, 2016-2018. Martina Tichovska CZE is another multiple medal winner.

The Russian Anton Foliforov has been the most notable male competitor, winning the WMTBOC Sprint gold in 2014/16/18 and the Long in 2014-2016. Krystof Bogar CZE has also won several medals. 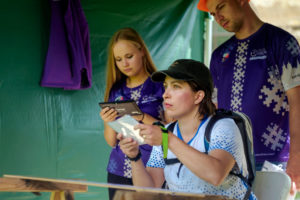 Stand-out performer in TrailO in the last decade is the paralympic athlete Ola Jansson, Sweden. He has won 7 medals in the ten WTOC competitions from 2010 to 2019, including 5 golds. He also won the Open class gold way back in 2004! In Tempo, two athletes stand out: Marit Wiksell SWE has won 1 gold (the most recent awarded in WTOC TempO) and 2 silver medals, and Pinja Mäkinen FIN (pictured) has won 1 gold (the first one awarded) and 2 bronze.