Orienteering in Nepal kicks off with a successful WOD Event 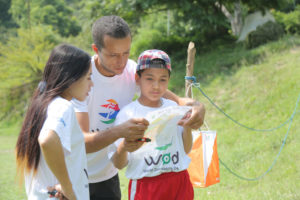 The successful World Orienteering Day (WOD) event held on 15th of May 2019 at the Royal Nepal Golf Club, Tilganga, Kathmandu not only symbolises the official take-off for Nepalese orienteering but is also a demonstration of what passion for the sport can achieve. Just a few months ago, the Nepalese Orienteering Federation asked the IOF for mappers and trainers to start up orienteering in the country. The Secretary General Mr. Radheshyam Dahal was advised to put in a request on the Global Orienteering Volunteer Platform. Those volunteers in the database who had stated expertise in mapping were contacted asking whether they would be interested in such a project. A few showed interest, stating that October would be the best month to go to Nepal for mapping in the terrain. Then there was an emergency: The Nepalese would like to hold their first-ever WOD event in May 2019! The volunteers were contacted again and it was Ronaldo André Castelo dos Santos de Almeida from Brasil, who raised his hand saying he would be able to spare the time during the first two weeks of May.

Ronaldo spent 17 days in Nepal, drawing maps, introducing orienteering to teachers and students, holding training sessions on the drawing a basic maps, and just being there to answer numerous questions. His motivation and energy quickly spread to all participants and WOD was attended by 80 children and adults, among them the Vice President of the Nepal National Sports Council Mr Pitamber Timsina and the Counsellor of the Brazilain Embassy in Kathmandu, Mr Jose Mario.

Here are a few words from Mr. Dahal, Secretary General of the Nepal Orienteering Federation:

“We were visited by Tom Hollowell, CEO of the IOF in February 2019. We were complete beginners to orienteering at the time and we had many unknowns. The officials of the Federation and some sports teachers and runners attended a training seminar held by Mr. Hollowell. After that seminar we were little bit more confident and we planned to do something better.

We applied to the Global Orienteering Volunteer Platform and registered our project. In a few days we were informed that Mr. Ronaldo Almeida from Brasil would come to help us. 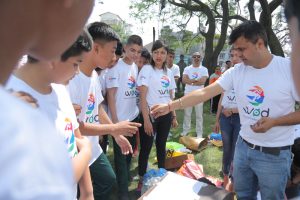 Ronaldo did a tremendous job. During his stay in Nepal, Ronaldo made 4 maps, trained some mappers and also trained runners and event organizers. Within 3 months of the official establishment of the Nepal Orienteering Federation we succeeded in holding a World Orienteering Day event with over 80 participants. After the two weeks Ronaldo spent with us we have at least five beginner mappers, more than 100 runners and more than 20 event co-ordinators. More schools are showing interest and we will keep our projects going. We had a first training race in Narayanchaur Park with a beginners map. More than 30 took part in that. After that we had a small race in Ranibari forest where all participants came to know what orienteering is.

At first it was very complicated to introduce orienteering here in Nepal. But now many people are associated with Nepalese orienteering and hundreds of students are interested in taking part in this sport. Nepal’s geographical perspective and Nepal’s natural terrain can be used extensively to develop orienteering. We hope that people from all over the world will visit Nepal for training at high altitude and to enjoy the virgin terrains for orienteering.”

Brazilian volunteer Ronaldo Almeida has the following to say:

“When I first started work in Nepal I noted the great motivation of Mr. Radheshyam Dahal in promoting the sport as the Secretary General of the Nepal Orienteering Federation. The first days of my visit were dedicated to presenting orienteering standards to the greatest possible number of people and to preparing for WOD. Starting from the second week I focused on basic training of mappers, ways of making base maps with available tools, interpreting mapping patterns, reading coordinates during fieldwork and mapping.

In parallel with the training of local staff, we visited areas for possible future events and identified 2 potential areas. At one of these I remarked on the potential for an international event. I also suggested concentrating on building a centre for orienteering training at high altitude.

It was a unique experience. Thank you very much for the opportunity.”

World Ski Orienteering Championships to go ahead as planned