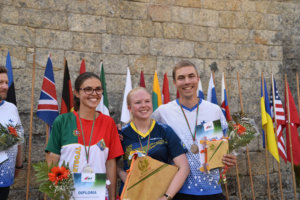 Swedish athlete Marit Wiksell, 28, dramatically achieved her big goal for 2019 in winning the TempO competition at the World Trail Orienteering Championships (WTOC) in hot and sunny Portugal in June. She qualified easily in fourth place in her heat, then in the final outclassed the opposition. She ended the competition with a 53-second lead – a huge margin in this context – over home orienteer Ines Domingues.

For this outstanding achievement, Marit has been chosen as TrailO Athlete of the Year 2019.

Marit Wiksell was born into an orienteering family, and attended her first TrailO meet at the age of 6. She achieved some outstanding results in Swedish competitions as a 16/17-year-old, and burst on to the international scene at the age of 18 with a PreO silver medal at the 2010 European TrailO Championships (ETOC). In 2012 she won the PreO gold medal at ETOC and also won the second-ever ‘World TempO Trophy’, as it was called then before TempO became a fully-fledged IOF-recognised format. She followed this up with a silver in the first-ever IOF-medal TempO competition at WTOC 2013.

Since then she has constantly held her place amongst the 10 best Trail Orienteers in the world, getting the PreO silver medal at WTOC 2014 in Italy and both the PreO and TempO bronze medals at ETOC 2014 in Portugal. But it is TempO that brings out the best in her performance, and her world placings in TempO 2016 to 2019 read fifth, fourth, fourth and first. This last result can truly be said to be the most emphatic international TrailO success in her sporting career so far.

IOF Athlete of the year is nominated by the discipine and athletes’ commission and decided by IOF Council.

No World Masters Orienteering Championships in Slovakia in 2020