Postponed first because of Covid and again this July because of fire danger, the three forest races of the Junior World Championships (JWOC) will now take place at the weekend: Middle Distance on Friday, Relays on Saturday and Long Distance on Sunday. Three very tight and exciting races!

All eyes will be on 20-year-old Hanna Lundberg, Sweden who is already established as a senior and is IOF world-ranked number 11. She won a World Cup Middle race on home ground in 2021, and followed this up with 3rd place in a World Cup Sprint this year. She was injured in mid-summer, but was back in business at the World Cup Finals last month, finishing 7th in the Middle race and running the 5th-fastest first leg in the relay. 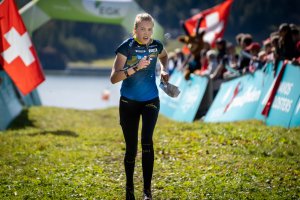 At JWOC 2021 in Turkey, Lundberg won the Middle race and also brought her relay team up from 4th to take gold, on a last-leg run that was the best by over 2 minutes; she was second in the Sprint.

She will have strong competition from amongst others the Swiss athlete Lilly Graber, Long Distance winner and 2nd in Middle at JWOC 2021. Graber came second to Elisa Mattila, Finland in the JWOC Sprint held this July. Another athlete with good results in all disciplines in 2021 and competing again this year is Pia Young Vik from Norway.

Axel Elmblad strongest of the men – but out of JWOC

One of the top favourites amongst the men, Axel Elmblad from Sweden, is unable to take part in JWOC after suffering atrial fibrillation (an irregular pulse rate). He is receiving special treatment to enable him to resume training. He and the Norwegian Tobias Alstad were gold and silver medalists respectively in the summer JWOC Sprint. The latter was a member of the victorious Norwegian Sprint Relay team, along with Sprint bronze medalist Mikkel Holt.

Alstad came to the fore in JWOC 2021 in Turkey, where he was 4th in the Sprint. But there are others to watch out for as strong contenders for medals this time round, such as Basile Basset, France who was Long Distance winner in 2021 and 3rd equal in the Sprint this summer with Mikkel Holt and Ilian Angeli, Italy. Angeli is also proving very adept over all distances, being placed 4th, 9th and 13th in the 2021 individual races. Competition in every race will for sure be intense, with athletes from several nations fancying their chances of getting a medal.

127 men and 117 women from 32 nations have entered for the races, to be held near Aguiar da Beira in the northern part of Portugal. This is only a small drop from the 37 nations that attended for the Sprint races in July. There’s also a rearranged ‘JWOC Tour’ of spectator races. The competition areas are mainly pine forest with many open areas of bare rock and a wealth of mapped boulders and crags. Runnability is variable, partly because of dense vegetation in the deeper valleys. The same arena will be used for the Middle and Relay races.

The three races can be followed live on the IOF website, and reports and leading results will appear here each day. The first race is on Friday morning, the Middle distance with courses of 3.5 km for women and 4.1 km for men.