On the first day, there was a competition event in Mizumoto Park in Tokyo prefecture. Many Japanese athletes joined the event and enjoyed orienteering and talking with Ugandan orienteers. In Uganda, there aren’t any terrains for training, so they were happy to do orienteering in such wonderful terrain.

On the second day, the Japanese team held a training event in the campus of the University of Tsukuba in Ibaraki prefecture. The club members had one-on-one coaching the Ugandans, helping them to improve their performance from the day before. 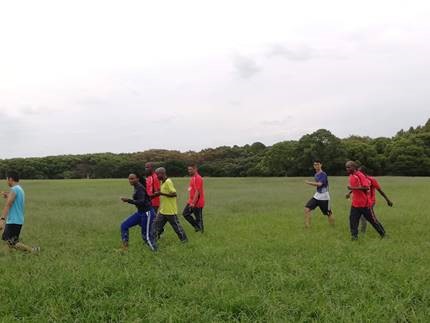 “We are a small club. But this time, we succeeded in such a big project. I understood that orienteering can connect us to world orienteers.” says Fumichika Tanino.

The Government of Japan promotes to contribution to the international community through sport in the shape of the program “Sport for Tomorrow”. The program was announced by Prime Minister Shinzo Abe at the IOC Session on the occasion of Tokyo making a bid for 2020 Summer Olympic and Paralympic Games.

The program aims at sharing the values of sport with more than 10 million people of all generations in over 100 countries, including developing countries, during the course of seven years between 2014 and 2020

Orienteers are adapting to COVID restrictions