Karolin Ohlsson, Sweden has got steadily better this season, culminating in victory by 1.10 in today’s Middle race in the technical sandstone terrain at Turnov. Surprise winner of the men’s race was home athlete Milos Nykodym, for whom a little-used route choice on a long leg near the end proved absolutely decisive.

Dry and sunny weather greeted the competitors and spectators today, the latter gathered in a cosy arena at the edge of the forest. One competitor missing today was Judith Wyder, who with stomach problems decided to sit today out in the hope of being fit again for the Sprint race tomorrow.

Very many of the women competitors lost time early on, including Natalia Gemperle, Russia (down 1.13 to control 3) and Tove Alexandersson, Sweden (1.30 down). The terrain was very technical, and particularly control 1 proved a challenge for many. Karolin Ohlsson was almost spot-on in this early section, however, and continued with a near-flawless run to take a convincing victory over the Swiss runner Julia Jakob. The race between Jakob and Lina Strand, Sweden was very close for a long time, and ended with a 1-second better time for Jakob. 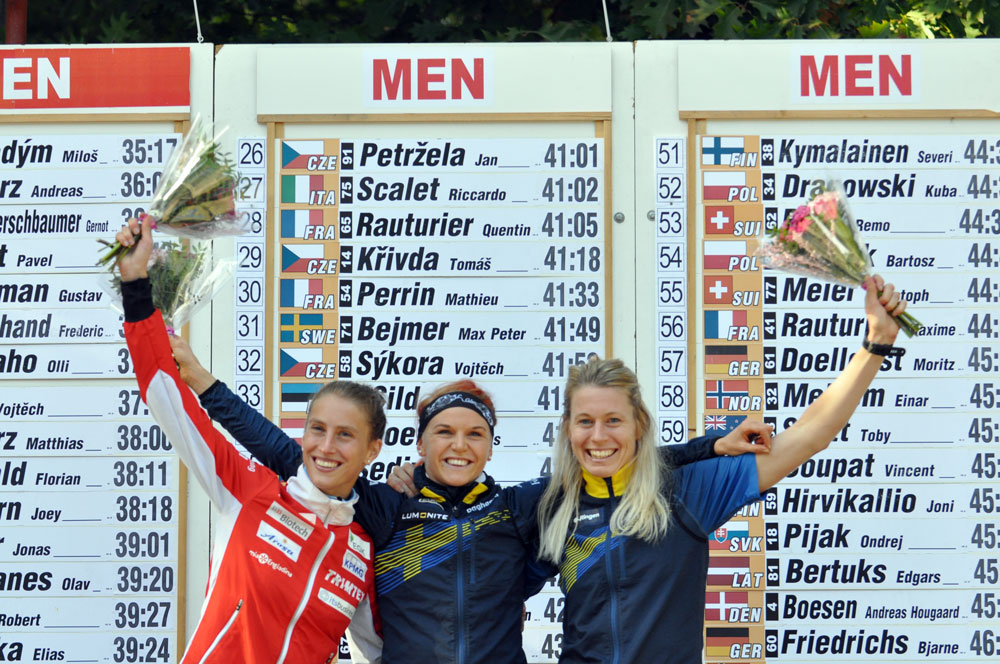 In the men’s race, it was runners with start times in the middle of the field who commanded attention today. The elder of the Swiss Kyburz brothers, Andreas, came in with a good time of 36.08, and in the end this was only beaten by Milos Nykodym, whose 51-second lead can almost wholly be attributed to his choice to run a long but fast route by track on leg 18-19, rather than going more directly through the terrain. Third was the experienced Austrian Gernot Kerschbaumer, 1.17 down on the winner.

These three had a long wait, but as more and more of the most well-known names showed up with mistakes of 1 to 1½ minutes, their hopes rose. Of the top three in the World Cup rankings, Matthias Kyburz did best in finishing ninth, thus strengthening his leading position. Olav Lundanes was thirteenth today, and Daniel Hubmann eighteenth.

Full official results are to be found on www.wcup.cz.

In the World Cup standings, Tove Alexandersson cannot be beaten, whilst Karolin Ohlsson has got ahead of Natalia Gemperle by 47 points, with Sabine Hauswirth in fourth spot. Matthias Kyburz leads Daniel Hubmann by 38 points, with Olav Lundanes a further 45 points down. Gustav Bergman is next in the list, followed by Vojtech Kral and Ruslan Glibov.

Tomorrow morning the World Cup season ends with a Sprint in the town Mladá Boleslav, the women’s A-race starting at 10.15 and the men’s at 11.20. Each of the A-races is for the top 40 in the World Cup rankings after today’s race; everyone else runs in the B-race later in the day.

Event Adviser Clinic in Switzerland will go ahead

Final qualifications for The World Games 2022