Favourites to the fore in World Cup Final

Tove Alexandersson, Sweden and Kasper Harlem Fosser, Norway were worthy winners of today’s Middle Distance, meaning that both end the season in top position in the 2021 World Cup standings. The women’s race was in doubt until close to the end, with Simona Aebersold, Switzerland having the fastest time for much of the race.

Fast open forest with complex contour detail and a lot of crags and rock meant that high concentration was necessary as well as strength and speed. This suited both winners; Alexandersson admitted after the race to “a few small mistakes, not always being exactly where I wanted to be”, whilst Fosser claimed to have had a perfect race with no errors. This was a fine climax to Fosser’s first season as a senior, and he finished with an impressive lead of 97 points.

The women’s race developed in a quite fascinating way, with fastest times at intermediate controls being regularly bettered as the last starters came through. Aebersold made a strong start and was 13 seconds up on Alexandersson by control 8, but she lost time on the second half of the course, enabling Alexandersson to finish with a time 23 seconds faster than Aebersold’s. Third place in the race went to Norway’s Andrine Benjaminsen, 1.28 down on the leading time, and fourth to Hanna Lundberg, Sweden, still a junior but having a fantastic season in senior races too. She ends in third place in the World Cup overall, a tremendous achievement. Sweden had three athletes in the top six in the race today.

In the men’s race a strong time was recorded early on by home athlete Riccardo Scalet; he set some impressive leg times that very few of the later runners managed to beat, and his time ended good enough for the bronze medal, 1.50 down on the winner. Both Matthias Kyburz and Daniel Hubmann made good progress, and Kyburz in particular looked strong and determined. Fosser outran everyone and showed perfect technique, however, and won by 1.24 over Kyburz. Mention should also be made of the fifth place finish for Gernot Ymsen, Austria – his best World Cup run to date. The top-ten list included four Swiss. 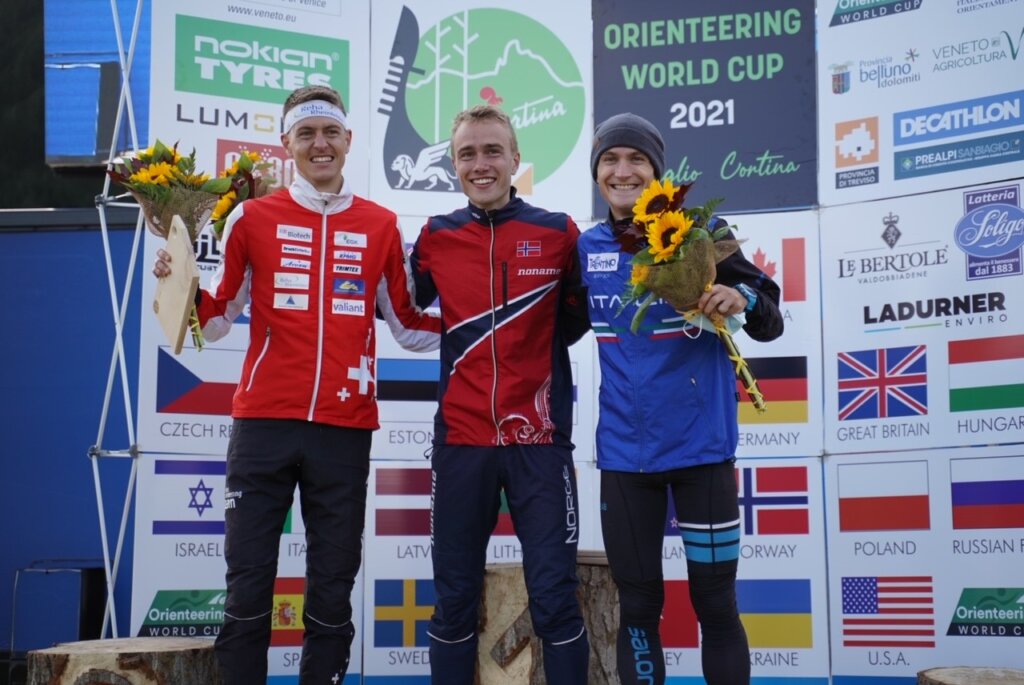 Today’s results mean that the top six in both women’s and men’s World Cup lists remain the same as before the race.

The final race tomorrow is the Sprint Relay, with live coverage starting at 1330 CEST.