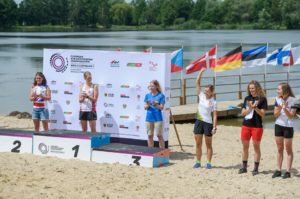 Interesting statistics from the recent championships in Poland: eight different nations won medals in the two individual events (Sprint and Mass Start Long Distance), and as many as eleven nations can look back in the satisfaction of achieving a top-six placing in at least one of the races! Very high standards are being reached in MTBO in many lands.

The medals went to the Czech Republic, Denmark, Finland and Russia (2 each), and Estonia, Great Britain, Spain and Sweden (1 each).  The only rider to win 2 medals was Camilla Søgaard, Denmark (silver + gold).

In all, 21 individuals got a top-six placing in one or other of the two races. Only 3 riders achieved this twice: Camilla Søgaard (2nd + 1st), Clare Dallimore, Great Britain (6th + 2nd) and Anton Foliforov, Russia (6th + 1st). The Czech Republic and Russia had the highest numbers (4) of individuals with top-six places.

What happened can be illustrated most clearly with a look at the women’s results: in both races the top six finishers were from six different nations – and only three of those nations had a top-six place on both days! In the men’s Sprint there were five nations represented in the top six.

MTBO as an orienteering discipline has grown rapidly in the last few years, with many more nations and riders taking part, although there are a few well-established nations still to come on board. What is most notable here is that quite a few nations now have riders able to reach the highest standards and win medals at international level. National training programmes combined with the international MTBO camps held each year are achieving remarkable results.

MTBO now looks forward to this year’s World Championships, to be held in Denmark starting on 27th July. Will we see a similar spread of medals and podium places there?