Double victory for Sweden in Sprint 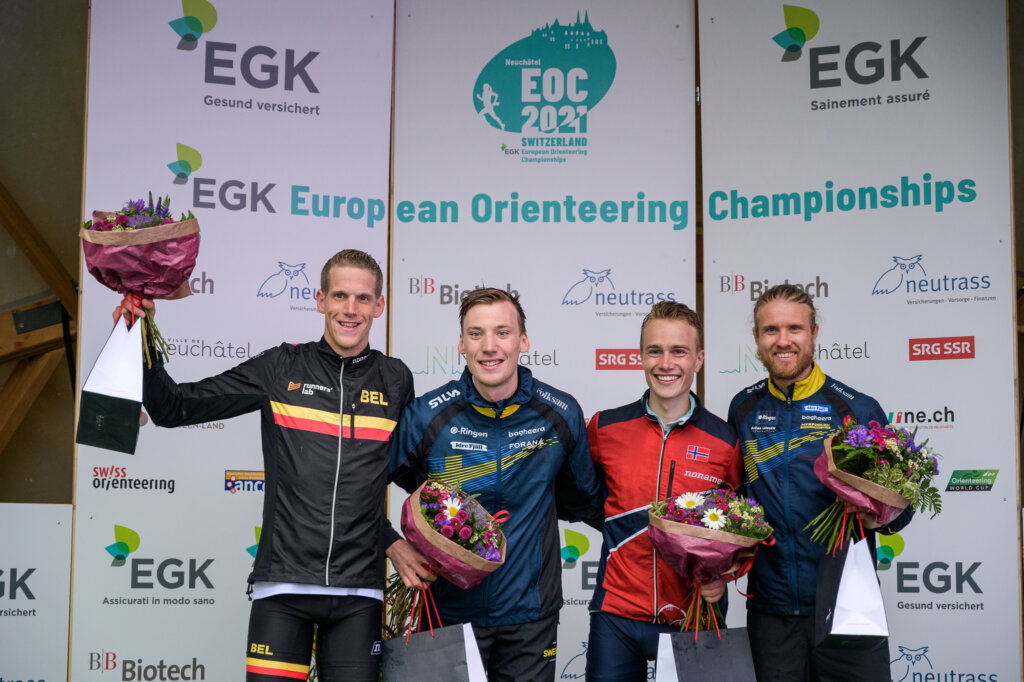 Tove Alexandersson won her second gold medal in 2 days in a very tight women’s race, whilst Emil Svensk took a convincing win with a 13-second margin in the men’s race in a rainy Neuchâtel.

Alexandersson finished just 5 seconds faster than Elena Roos; Simona Aebersold, 1 second slower than Roos, took the bronze medal. Lina Strand was a further 15 seconds down in fourth place. In the men’s race, second place went to the Belgian Yannick Michiels, with the bronze position shared by Gustav Bergman and Kasper Fosser, both being recorded 9 seconds slower than Michiels.

As in the KO-Sprint, there was plenty of route choice on the course and potential for small mistakes, but here the decisive section was a long leg across a slope, for the women controls 5-6, with a high northern route of 695m and two lower southern options, the shorter of which was 715m. In fact the shorter of the lower options proved optimal overall by up to 15 seconds for the fastest runners, as there were wider routes here for fast running, and with fewer turns and a less demanding hill climb.

Aebersold took the northern route whilst Alexandersson and Roos ran the southern, and Roos was 12 seconds faster than Aebersold on this leg – so Aebersold would certainly have been in strong contention for the gold medal if she had chosen a southern option.

Hanna Lundberg, Sweden was fifth starter and occupied the leader’s chair for a long time before being displaced by Andrine Benjaminsen. Lina Strand took over shortly afterwards with a 16-second lead, but this was eclipsed by Aebersold and Roos and finally by the last starter Alexandersson, successfully defending her European title. Lundberg ended in eighth place.

The men’s race included the same long leg, this time controls 8-9, and again the choice here proved decisive. As with Simona Aebersold, Michiels achieved a fine result after taking the northern route. Svensk, who missed the KO-Sprint Qualification through illness and so had two days off, ran strongly throughout and held the lead for most of the race, making no significant mistakes and taking the best routes. TV-coverage showed Bergman running well to shake off his disappointing form in the earlier races, and Fosser also one of the fastest but making a couple of small mistakes. Fosser ended the championships with three bronze medals.

The race had 119 starters. Home athlete Timo Suter occupied the leader’s chair earlier on, later to be replaced by his compatriot Riccardo Rancan. Defending European Champion Matthias Kyburz took the northern option on the long leg and made a couple of errors, finishing in eleventh place.

So ends a successful but – because of Corona – an unusual European Championships. The World Championships are scheduled for 4-8 July in Doksy, Czech Republic.