The Swedish men started off strong, taking a slight lead already after the first leg, with Isac von Krusenstierna of the second team and Albin Ridefeldt of the first team handing over to Emil Svensk and Simon Hector respectively. Each nation was allowed to enter three teams, however only the best result for each country counts in the standings. Magne Daehli advanced Norway’s position on the second leg, splitting the Swedish teams at the handover and sending out Kasper Harlem Fosser on the last leg only two seconds behind Sweden’s third team in the form of Max Peter Bejmer. However, only 11 seconds behind them, Gustav Bergman took up the chase. Here he proved himself once again to be a master of the final leg, for even after quite a big mistake he chased them down to take back the lead. In the end, it came down to a nail-biting sprint finish between Bergman and a very strong Fosser, with Bergman beating the young Norwegian by only one second. Matthias Kyburz of Switzerland followed in third position. 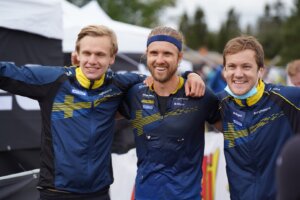 The first leg of the women’s race was a slightly more diverse affair, with Tereza Janosikova of the Czech Republic, Veera Klemettinen of Finland, and Grace Molloy of Great Britain forming a leading group for a while. But soon enough they were caught and subsequently overtaken by Sweden’s Lisa Risby and Emma Bjessmo. Johanna Öberg and yesterday’s winner Hanna Lundberg took over on the second leg, lengthening the gap to Svetlana Mironova of Russia and Amy Nymalm of Finland. Following that, it was Sweden vs. Sweden, with Sara Hagström and Karolin Ohlsson taking it in turns to make mistakes and alternating the lead. Ultimately it was Sara Hagström who brought it home for the first team, followed by Ohlsson for Sweden 2, Natalia Gemperle of Russia and Ida Haapala of Finland. 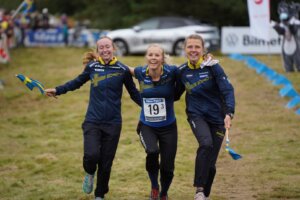