The CX80 MTBO World Cup Round 3 got off to a fast start in the Bulgarian sun with the Sprint in the city of Kardam.

The dense network of paths and roads in the flat and complex sprint terrain seemed to suit women’s World Cup leader Camilla Søgaard (DEN) well, as she crossed the finish line with the fastest time of the day. But just minutes later, Ruska Saarela (FIN) went in to the finish with the exact same time, 17.11 minutes to tie for the win. 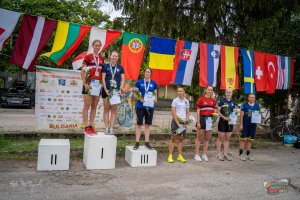 Søgaards victory was her third in this year’s CX80 World Cup and with a lead of 71 points, she is now certain to win the overall World Cup of 2022. Her first overall WC win after finishing second twice.

Nikoline Splittorff (DEN) is still in second position with 254 points, with Ruska Saarela 25 points behind before the final race, Long distance tomorrow.

The men’s overall World Cup was decided as well today after Vojtech Ludvik (CZE) took an impressive win. He won by 42 seconds, with Jonas Maiselis (LTU) in second and fellow Czech Martin Kanta in third.

World Cup leader Krystof Bogar (CZE) was more than a minute behind, but as he kept Marcus Jansson (SWE) behind him, and with Samuel Pokala (FIN) and Simon Braendli (SUI) not racing in Bulgaria – Bogar can’t be caught and returns to the World Cup throne for the first time since 2018.

Ludvik and Jansson still has the chance to take over Pokala’s second place with a great race tomorrow.

Today’s race was also the first ever U23 World MTBO Championship race and what a start for the new class! Kaarina Nurminen (FIN) won by just one second, with Nikoline Splittorff (DEN) in silver position and bronze for Iris Aurora Pecorari (ITA).

Bartosz Niebielski (POL) was crowned U23 Men’s World Champion after winning by 15 seconds. Ignas Ambrazas (LTU) beat Miika Nurmi (FIN) by two seconds in the fight for the silver.

Dive into the results, GPS and TV from today’s race at IOF LIVE.

The Long distance in the Momino forest tomorrow is the last race of the individual CX80 World Cup 2022.