With competition in terrain at a standstill in countries around the world, what can orienteers do to keep in trim? For technical training many have turned to electronic alternatives; eTempO, a virtual version of the speed-format in Trail Orienteering, in particular is proving a great hit. Since March, virtual TempO events have been organised in several nations and have attracted big participation numbers. The biggest of these has been the TORUS Cup – more about that below.

But what happens in virtual TempO? In each event there are several ‘stations’, usually six but can be up to eight. Each station has a photo of some terrain seen from a fixed point – often parkland, or areas of paths and buildings are used – with 6 computer-generated O-kites superimposed on the photo at specific points. The area is mapped in detail at small scale, e.g. 1:4000.

When you key ‘Start’ and the first station has loaded, time starts ticking away. You see the photo with the kites for less than 5 seconds, then the first task is shown. There is a photo with the 6 kites, a segment of map with one circle on it and a pictorial control description, and buttons A, B, C, D, E, F and Z. You have to decide which kite, if any, is at the centre of the circle on the map. And as quickly as you can!

The kites are A to F from left to right, and you key Z if you decide there is no kite at this point on the map; that can occur quite often. Speed is of the essence, but beware – a mistake costs 30 seconds in time, and the eventual winner is the competitor with the lowest overall time taken – decision time plus mistakes.

No let-up!
You’ve made your first decision, but there’s no let-up: as soon as you’ve keyed your answer, Task 2 comes up on screen – a new map segment with circle. You try to get in the ‘flow’ – quick decision, but not too quick – trying to avoid a mistake. Each station has 5 or 6 tasks; once you have completed these, time stops and you can take a few deep breaths before embarking on Station 2 – a new venue with new photo and new map segments.

eTempO, like real TempO, is great for improving your map-reading skills, relating map to terrain and vice-versa, and developing an eye for the most important details on the map. When you start on a station, sometimes it’s quite hard to work out where you are, on the photo and map, and where the kites are. TempO planners are very clever and imaginative! Like in real orienteering, quite a lot of training and experience is needed to get really good. The top stars in eTempO are lightning fast.

TORUS Cup – 550 entrants from 35 nations
The TORUS Cup was an 8-stage competition where one’s best 5 performances counted for the final results. It was held on Tuesdays and Thursdays, one stage each day, in May and June over a period of 4 weeks; you could log on and complete the course at any time of day. It used ‘TempO Simulator’ software devised in 2011 by Libor Forst and Lenka Forstová, Czech Republic, and each stage was planned by a different person. Over the 8 stages there were 55 stations, on terrain in Finland, Great Britain, Hungary, Lithuania, Slovakia, Spain and Sweden. There were 550 entries from 35 countries, the most entries coming from Russia and Spain, then Great Britain and Finland. In the overall results, 8 countries were represented in the top 10; only Italy and Japan had 2 participants in the top 10.

The overall winner was 27-year-old Kentaro Iwata, who has competed for Japan in 4 World TrailO Championships, his best result being 10th in the TempO Final in 2017. His best 5 results in TORUS were all in positions 13 or above, and he won Stage 4. In these best 5 stages he completed 183 tasks in all in a total of 18 minutes and 2 seconds – that’s under 6 seconds per task! Incredible. And he made only 10 mistakes. Second place was taken by Pavel Ptáček, Czech Republic and third was Mateusz Kula, Poland. Ptáček’s performance was very impressive – he scored over 97 points in 7 of the 8 stages; he was fifth in the TempO Final at last year’s World Championships. Kula was born in 2003, and competed in the World TrailO Championships in 2017. Fourth and fifth places went to two elite Foot Orienteers, Alessio Tenani, Italy and Severin Howald, Switzerland.

Two tasks to try
Imagine you are in the competition, under time pressure! Try to measure the total time you take for the two tasks. In each task, decide which flag, if any, is at the centre of the circle. Answers are at the bottom of the article. 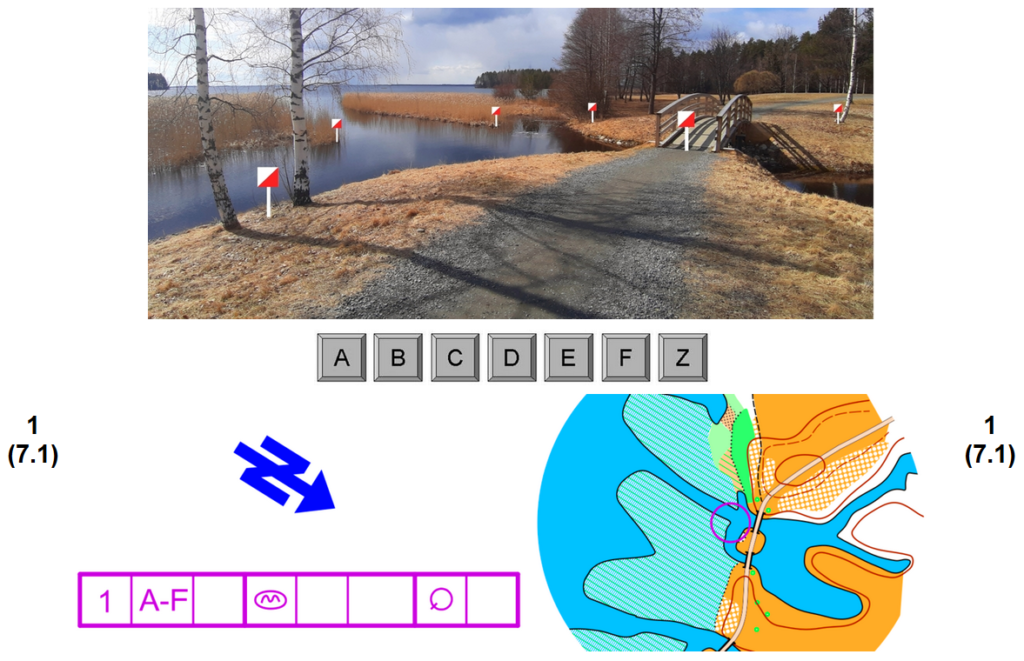 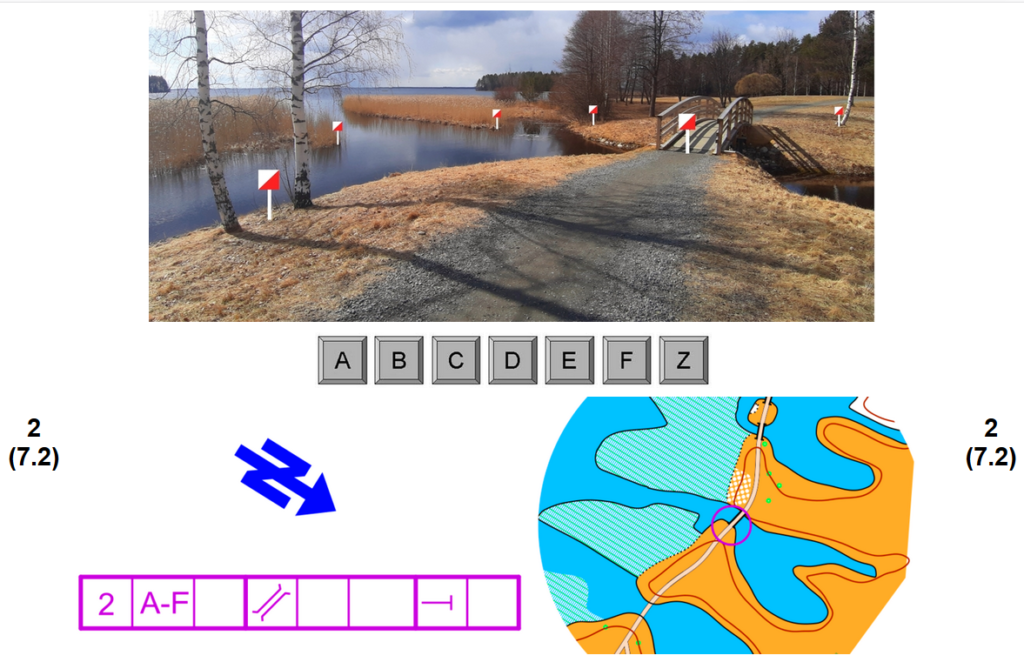 Try your hand at the whole competition – free of charge!
The TORUS website has all the competitions available for review and training, along with a big range of other training events. All you have to do is register; details are found here. And it’s free; as the website explains: “Entry fees: before 15th May, €0. After 15th May, double”.

If enough planners offer their services, another TORUS may be held as early as in the autumn. And there are a number of other eTempO and ePreO competitions being held – details are in the IOF Eventor Calendar.

So log in, do some training and try a competition, and get in form for the next TORUS!

Answers: B and Z. The camera position is on the island. Many competitors too hastily chose E for the second task – but the circle is on the end of a different bridge! To give an idea of the speed of decision of the top competitors, two – Matija Razum CRO and Daniele Guardini ITA – correctly answered all six tasks at this station in just 16 seconds!