Known widely in the orienteering world at large as the ‘Mother of TrailO’, Anne passed away peacefully in her home on 27th November at the age of 84 after a long battle with cancer.

She was introduced to Orienteering for handicapped people in 1989 at the World Orienteering Championships in Sweden. At that time, the British Minister for Sport was arguing that all Governing Bodies should provide for disabled people in their sport. Sponsored research supported Anne in going to study and take part in ‘handicapped orienteering’ at the 1990 Swedish O-Ringen.

Anne worked hard to get TrailO successfully established in Great Britain, then came into the international TrailO scene too. She took the Chair of a new IOF TrailO Steering Group in 1993, and continued as Chair when it became a Committee and then morphed into a Commission, finally retiring from this post in 2010. In 1993 she wrote ‘Trail Orienteering – a comprehensive practical manual’, 64 pages A4 with many illustrations and coloured maps.

Anne had a very sharp mind when it came to planning the way forward for the new IOF discipline of TrailO to make it into one with clear and unambiguous rules, fair to all participants and requiring skill levels at least the equal of other Orienteering disciplines. She envisaged a top-quality sport that would attract both handicapped and non-handicapped orienteers from nations throughout the world, and to achieve her vision, she was involved in considerable negotiation with others with alternative views on how things should be done, especially in Sweden. But she battled on, and eventually got her way on most issues.

Anne had a quite outstanding missionary zeal, which meant that very many capable people all over the world were carried away by her enthusiasm and contributed valuably to the cause. She has always been a great communicator, in this case doing her utmost to make the world aware of what was going on. Updates on technical progress and TrailO’s spread around the world appeared regularly in the Orienteering press. International TrailO clinics, initially at the Swedish O-Ringen, started in 1994. She worked very hard to get TrailO better known in handicapped communities, but at the same time she was rigorous in applying rules that ensured that a clear definition of ‘handicapped’ was applied to participation in the Para class in TrailO events. 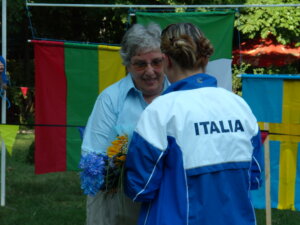 For her work in developing TrailO internationally, Anne was awarded the IOF Silver Pin in 1998.

Many countries began TrailO as a result of her efforts, and this led to the inaugural World Cup in TrailO, held in Scotland in conjunction with the 1999 World Orienteering Championships, and then the first World TrailO Championships (WTOC) in Sweden in 2004. She did as much if not more work outside the committee room, and one of her greatest achievements was to organise a very successful WTOC in Scotland in 2012, an event that included the first (unofficial) WTOC TempO competition.

Both in Britain and internationally, Anne was always strongly supported by her husband Don, who provided his own significant input as an IT specialist. He once famously commented, at a TrailO World Championships banquet, that “the majority of people in this room are here because of your input.” Anne’s legacy is a thriving sports discipline, now further developed world-wide with speed and relay formats and very popular ‘virtual’ competitions online. She will be remembered best for her quite remarkable achievements in bringing TrailO up from almost nothing to the sophisticated sport it is today.