After four of this year’s nine World Cup races, the overall standings are headed by Swedish athletes Tove Alexandersson and Gustav Bergman.

Alexandersson has maximum points, having won all four races – the World Championships Middle and Long distance races, and two World Cup races in Finland. Marika Teini, Finland and Natalia Gemperle, Russia are enjoying a close tussle for second place, with Teini ahead by three points at this stage. Fourth is the young Swiss athlete Simona Aebersold, who in her first year as a senior has won two silver medals and one bronze at the World Championships; in the WOC Middle Final she was only 5 seconds down on Alexandersson. 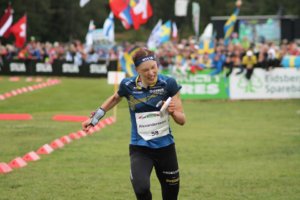 Tove Alexandersson in sprint finish at WOC in Norway

Sweden has three athletes in the top ten in the standings, with Lina Strand holding tenth place. Finland, Russia and Switzerland both have two in the top ten, and Norway has one (Kamilla Olaussen in seventh position).

Olav Lundanes, Norway matches Gustav Bergman in having two wins, Lundanes becoming double World Champion from the WOC Individual Finals. Bergman was better-placed than Lundanes in Finland, so holds first position in the World Cup list at the moment. Frederic Tranchand, France is third. In the men’s list there are two from each of Norway, Sweden and Switzerland in the top ten, and Sweden’s Emil Svensk is eleventh, just one point down on tenth place. The Czech Republic, Finland, France and Ukraine each have one athlete in the top ten. 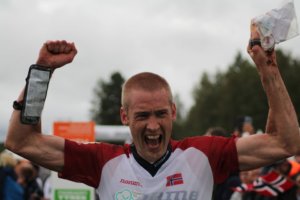 There are five World Cup races remaining in 2019: three in Basel, Switzerland in late September and two in Guangzhou, China in late October.

Dates set for major events in 2022 and other event updates