Achieving a dream with WOC Clinic 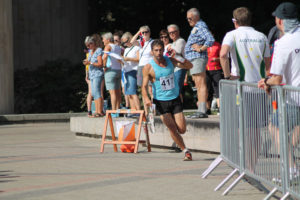 Gerardo García, an Argentinian orienteer who participated in the World Orienteering Championships thanks to WOC Clinic, tells us about his experience in Latvia

Gerardo García discovered orienteering in 2006, aged 23, in his natal Argentina, while he was working as a tourist guide with a group of European orienteers: World Wide Orienteering Promotion. For 20 days, this Argentinian had the chance to travel around South America practising orienteering almost every single day. Only twelve years later, in 2018, and thanks to WOC Clinic – an initiative by IOF in order to enable orienteers from smaller countries to participate at WOC – García had the chance to take part in the World Orienteering Championships held in Latvia.

When thinking about how he reached the incredible opportunity of participating in WOC 2018, García highlights the importance of the people he has met along the way, like Jaroslav Kacmarcik and Zoran Milovanovic, two men whom he felt really identified with since he met them. “One or two months before WOC 2018, Jaroslav invited me to participate and told me that both Zoran and him will come with us” – he says. Once there, sharing experiences with the rest of the WOC Clinic team was an essential part of WOC Clinic. Besides the athletes, he recognises the importance of the trainers, Zoran and Jaroslav, who played an essential role there.

As told, the opportunities to practise orienteering in Argentina are not as many as in other countries so, when Gerardo came back home after WOC, he decided to find a way to promote this sport in his country: “I have made more than 25 maps this year. Now, my energies are focused on it and on organising events!” – García tells about his work for the sport. He also wants to make orienteering part of schools, so he is now preparing teachers to be able to teach orienteering to children.

Finally, he tries to value all what he has learned from WOC Clinic, and he resumes the experience as one of those moments you live again just by remembering. He considers effort and the help of the people who met along the way – like WOC Clinic- as the main support to achieve anything you want.

European Orienteering Championships 2021 will be in Switzerland